If you’re interested in launching a career in any business function of the media industry, apply to the T. Howard Foundation Internship Program. The final deadline is December 1. 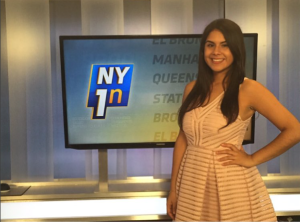 Jenisse Bouret (THF’ 15) interned at NY1 Noticias and is a senior at SUNY New Paltz.

I remember viewing the 2014 T. Howard Foundation (THF) Summer Intern Orientation video and thinking the students had exaggerated the truth when they claimed the experience was “life changing.” Months later, I found myself sharing a similar testimony and meaning every word
of it.

THF Provides Competitive Advantage Over Other Interns
In late April 2015, while completing a study abroad program in Ecuador, I was notified that I had been chosen as a THF news programming intern with Time Warner Cable’s NY1 Noticias. One month later, I was invited to interview for an internship at another Spanish-speaking news channel (to which I applied on my own). However, because I had already accepted the NY1 Noticias internship, I knew in my gut that having the connection with THF would be indispensable in my career path. 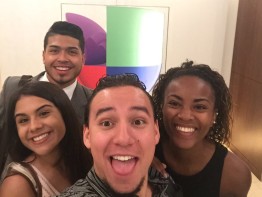 Thankfully, I followed my intuition because the skills I gained after THF’s three-day Summer Intern Orientation were not only enriching, but also were key to my success as a news programming intern.

After orientation, I felt confident knowing that I had gained an aptitude for interacting with professionals at all career levels. I also felt self-assured after receiving advice from media industry leaders, which gave me a competitive advantage over other interns in the field. Additionally, as a result of orientation, I overcame my fear of networking and was comfortable connecting with people in different departments at NY1.

Paid Internships Help Students Build Brand
All T. Howard Foundation interns are paid for a full-time schedule (32 hours per week). The money I earned during my summer internship allowed me to purchase professional clothing—a necessary part of stepping into a sphere where one’s appearance represents one’s work quality and potential. Dressing for success enabled me to build my brand and project how serious I take myself as a budding media leader. 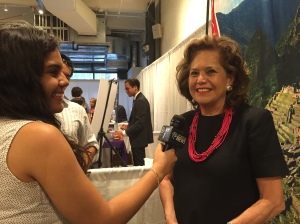 I was the only THF intern at NY1 Noticias, and the only intern to be paid. I also was able to use NY1’s cameras whenever I chose to during work hours. Both of these privileges were due to the fact that I was trusted because I was handpicked as a T. Howard Foundation intern.

Assigned Mentors Provide One-on-One Career Advice
As a THF intern, I was also paired with a mentor who works professionally in the media industry. My mentor was Edgar Corona (THF ‘11), Manager for Hispanic Fan Strategy Marketing at the NFL. Thanks to our professional relationship, I was able to gain more experience conversing in an informal setting and learning how to clearly express myself.

Overall, being a THF intern has expanded my understanding of the opportunities of which I can take advantage within media. The T. Howard Foundation has empowered me to overcome obstacles and defy limitations. Had it not been for THF’s role in my development as an aspiring media innovator, I would not be the informed, socially aware and motivated young woman I am today.

Jenisse Bouret is a senior journalism and Spanish double major at SUNY New Paltz. She is helping to recruit the next class of THF interns as a campus ambassador. 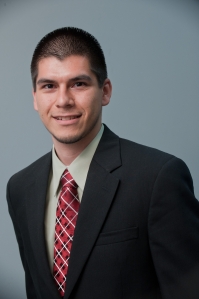 Two key elements for Edgar Corona launching a successful career in the media industry are networking and mentorship. Growing up in Los Angeles, Edgar moved to the East Coast to attend Georgetown University in Washington. DC. At Georgetown, Edgar majored in marketing and international business. In his marketing classes and during an internship experience after his freshman year of college, Edgar says that the roles media promotions and advertising play in marketing grabbed his attention, “I was working with a political marketing team and was able to really see the face-to-face marketing and distribution. That is where my interest in media really began.”

At that time, Edgar shared his interest in media with one of his mentors and she suggested that he pursue an internship with the T. Howard Foundation (THF). Edgar, ever persistent, researched the Foundation and requested an informational interview with Sharise Kent, Senior Project Manager. His meeting with Sharise increased his interest and he applied for the summer internship program during his junior year. After being selected for THF’s Final Talent Pool for summer 2011 opportunities, Edgar then landed an internship with ESPN, in the sports network’s sales and marketing division, located in New York City. During the Foundation’s 2011 Summer Internship Orientation, Edgar continued to network and cultivate mentors. “It was fascinating for me to see and learn how individuals really communicated and contributed to different parts of the media sector.”

The T. Howard Foundation pairs all its interns with a mentor. Bryce Adams, an active THF alumnus who now works for the New York Yankees, was assigned to mentor Edgar. He often turned to his mentor for guidance. “Bryce was experienced in the field, and I was able to talk to him about the experiences I had in my role and how a project would develop, and he gave me pointers and advice on how best to handle a situation.”

After Edgar concluded his internship with ESPN, he returned to Georgetown for his senior year and maintained the relationships he established during the summer and also spread the word about the T. Howard Foundation Internship Program at campus events. 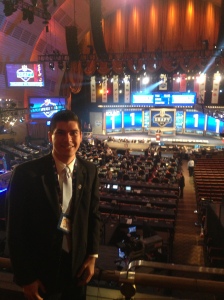 Edgar Corona at the NFL Draft

After graduation, Edgar secured a position in the NFL’s highly competitive Junior Rotational Program. In July 2012 he began an assignment as a Marketing Coordinator in the NFL’s sponsorship department focusing on entertainment marketing.

“One of the reasons I really like this industry is because it is always changing and it is constantly evolving where you always have the opportunity to learn,” Edgar stated last week. “I have been working with partners, players and agents to understand how players and teams cooperate in promoting the teams.”

Edgar credits the T. Howard Foundation with providing him with the resources and access to individuals that have allowed him to begin his career path. In fact, THF chose Edgar to represent all Internship Program alumni by inviting him to speak at last year’s Diversity Awards Dinner, held annually in New York, and attended by multimedia industry executives.

At the beginning of 2014, he transitioned out of the NFL’s Junior Rotational Program and was promoted to a full-time Marketing Coordinator in the League’s entertainment and promotions department. Edgar encourages students to “take advantage of the opportunities they encounter, whether they are big or small there is always an opportunity to learn; there is always an opportunity to meet new individuals and grow as individuals and professionals. The resources provided by this program (T. Howard Foundation) really make it helpful for individuals and puts you in a position to succeed.”